Writers, what do your characters DO? When they’re not catching criminals, falling in love, crossing the ocean or solving mysteries, what to they do?

Readers, have you ever thought outside the book? Have you ever wondered what the characters you’ve come to know and love do when they’re not cavorting across the pages of your books?

Or have you, the author, told your readers already? Have you included the characters hobbies and interests as part of their story, part of revealing their character? Because, let’s face it, we all do something in our spare time, even if it’s sitting in front of the tv, or falling asleep on the couch. Our interests and hobbies tell a lot about us.

If someone tells you they like to go scuba diving and hillwalking, you quickly get the impression they are pretty active, energetic, out-doorsy. If they say they like to go fishing, taking the dog for a walk in the park, doing a bit of gardening, you’ll think of them as a little less adventurous but still active and still enjoy being in the fresh air. What about stamp collecting, video-gaming, knitting, reading – quieter pursuits? Perhaps they’re altogether quieter and prefer to be indoors.

Sometimes you meet someone who likes a real mixture of all of the above. Maybe most of the people you know like doing a good mix of things.

But, whatever it is they do, it can shape how they live their lives. It dictates how they use their time, how they spend their money, how much they interact with other people.

As writers, if we want to make our characters live on the page, if we want our readers to identify with them, feel they know them, almost expect to bump into them on the street, then we need to think about what our characters do when they’re not rushing about through the main plot of the story. We might only allude to it in passing, or we might build the story round it. Either way, it can enhance our writing to give our characters a hobby, an interest, a passion.

As readers, do you find it helps you identify with the character who enjoys gardening, as you do? Or who scuba dives like you’d like to? Who horse rides? Or who plays video games? Or knits? Or sews?

In my latest release, Gold Plated, my main character, Rosanna, loves to paint, to design clothes and to make them. She’s enjoyed these pursuits since she was a young girl.

Can you imagine her lying on the grass in her mother’s garden, sketching the shrubs and trees, painting the flowers? Or sitting at the patio table taking inspiration from the colours and shapes of the flowers for the next dress she intends to design and make? 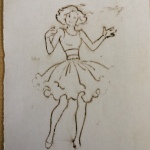 What about now she’s older? Can you picture her sitting in her conservatory, looking out at her garden, still allowing nature to inspire the dresses she designs 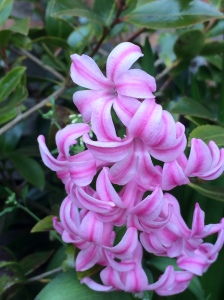 What does her interest in such a pursuit, and the fact it has been the interest of a lifetime, tell you about her? She’s turned seventy now and it’s still her passion. Does that help you picture her?

Perhaps if she tells you about the dress she’s designed and made for her Golden Wedding Anniversary party:

“The dress I’m going to wear tonight is hidden in the wardrobe till later. I want it to be a surprise for Paul. He hasn’t seen it yet and has no idea of the peaceful hours I’ve spent sewing while he’s been out and about. It makes me smile every time I open the wardrobe door, push aside the things it hides behind, and see my handiwork hanging there. Inspired by the pale, creamy-yellow, woodland primroses that bloom in our garden every spring, designed and fashioned over the summer months after their faded beauty folded and faded further, it has been such a delight to make. Impossible to improve on nature, all I could do was allow the delicate flowers to inform my eye and guide my hand as I sketched and painted, desiring to capture the essence of their beauty in the spring to infuse into my work in the summer.
The chiffon material I sought out is gossamer thin and beautiful, the colour soft as sunshine on a misty day, and the dress slips over my still-trim figure in flattering, floaty, fluted layers to just below my knees.
Being so fine, it is one of the most difficult materials I have ever worked with, but worth every painstaking moment of the hours and days it took to cut and sew. Even the buttery silk lining had to be handled gently. Never have I worked so slowly and never have I been so rewarded for my care.
My fingers melt with pleasure as they linger on the fabric, and I long to feel my creation slip over my body to caress my skin.
I thrill with contented anticipation.”

Rosanna and Paul are celebrating fifty years of marriage.

Their daughter, Heather, has helped plan their Golden Wedding Anniversary party, and it looks like being a wonderful night: sixties music, all their friends and family present, and Rosanna has bought the perfect golden gift for Paul.

What could possibly go wrong?

When an uninvited guest shows up, Rosanna’s world is shaken and she is forced to look back over their fifty golden years and see them as they were.

Were they golden? Or just gold-plated?

Gold Plated is available right now on Amazon Kindle. You can read it FREE if you have Amazon Prime. And the paperback will be published in a few weeks. 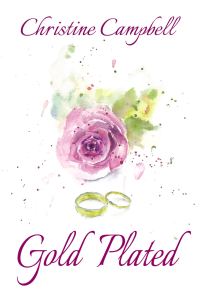 Give yourself a treat!

This is not about THE Blank Page. The one every writer dreads, the one that stares back at you from screen or notebook, begging to be filled with winsome words.

no matter where you find them

A short story by Christine Campbell

Justin stared at the blank page attached to his easel. Six-thirty in the morning and it was still blank. This was the seventeenth blank page he’d been confronted with since he rolled home from the pub last night with Steve’s remark ringing in his ears.

‘Yeah, exhibition time, remember? You’ve probably already submitted yours.’ He thumped Justin on the back and started putting his coat on. ‘Not like me. Always at the last minute. Can’t stop fiddling with the blessed thing, probably making it worse instead of better. Oh, to have your flair and natural talent. You don’t need to fiddle. Sketching seems to come easy to you as breathing.’

Justin smiled. It was true, he did find it easy. Give him a subject and in a few sweeps of a pencil, he had it captured.

He’d forgotten about the whole exhibition thing though, and contrary to Steve’s assumption, he had not submitted. He signalled the barman for another pint. No worries, he’d skip this one. It was only an art college exhibition.

Just as Steve moved off, he threw back the killer remark. ‘Wouldn’t care so much, but it’s fifty percent of this year’s final assessment. See ya!’

And he was gone.

Grief! So it was!

The memory of Professor Clarke standing in front of them trying to get their attention as they all packed up for home, shouting the information, waving a sheet of paper at them, telling them to take one as they went – it all came flooding back with the beer he swallowed.

He hadn’t bothered to read what was on the sheet of paper. All he remembered was, it wasn’t blank!

Finishing his pint too quickly, feeling its effects as he grabbed his coat and staggered to his rooms, he lunged into the flat and dived into the drawer where he’d stuffed the forgotten instructions.

Grief! Steve was right. Fifty dratted percent! Fifty! And it had to be ‘new work. Not seen or submitted previously.’ That put paid to one of the plans he’d hatched on his way home.

Seventeen failures later, he was staring at a blank sheet of art paper tacked to his easel, with nothing in his mind. Nothing! Nada! Rien!

He knew there were seventeen failures lying crumpled at his feet because he had started a new pad of eighteen sheets and here he was on the last one with nothing to draw. Another hour and he’d be too late to sneak it into the exhibition along with all the other last minute entries.

Closing his eyes, he could visualise the area he’d been assigned. A delightfully prominent spot, assigned to him as one of the Professor’s  favoured pupils, the rest of his year’s work already beautifully displayed there with just the right sized spot left expectantly, dead centre, for this most important piece of the year.

The piece he’d supposedly been working on all term.

The piece he hadn’t bothered to do, assuming he could rustle something up anytime, and what did it matter anyhow. It would be good enough. He was great at sketching – once he had the inspiration.

Inspiration, that fickle, flirtatious female had waltzed out the door as he’d staggered in last night.

And there it was.

And half an hour left.

He showered and changed into fresh clothes, stood at the easel again and summoned the fickle female.

This time she came at his call. Elated, he did what he had to do, gathered his things and rushed out the door, his coat flapping behind him as he dashed down the stairs out onto the street and made a crazy flight to the art college. Last of the last, he hung his work, stepped back and smiled. Sublime. Inspired. Unique. Perfect.

Standing well back, modesty forbidding him from flaunting his smugness, he watched the punters view his work, delighted that it drew so many comments, initiated so many conversations among them, caused so many to stand gazing at it, deep in thought, as he’d intended.

Even Professor Clarke had smiled and nodded his head, as though seeing for the first time the quality of his student.

Victory was his! Victory snatched from the jaws of defeat.

Steve was speechless. ‘Wow! Don’t know how you do it. Always a shocker how far out the box your work is,’ what he eventually managed to get out.

The description Justin had pinned beside his work had invited the viewer ‘to interpret the work as he would – to allow the mind to wander where it would – to view his work as a catalyst to deep, meaningful pondering.’

Perhaps it should not have surprised him when the year assessment results were posted out, and, after ‘deep, meaningful pondering’, these were the marks Professor Clarke gave him for his inspired exhibit:

A blank sheet of paper.

A smaller, but equally empty page as the one he’d so proudly hung as the masterpiece of the exhibition.

If you enjoyed this story and would like to read more of Christine Campbell’s writing, here is the link to her Amazon Author page and her published novels. And, if you prefer to read a paperback, here in the link for them.